When renowned Naples, Florida designer Renée Gaddis of Renée Gaddis Interiors, needed an exceptional designer piano for one of her high-end clients, she called Euro Pianos Naples, who specializes in luxury pianos and art. Working with a designer is the forte of Sunny Reuter, principal of EPN. She has worked with many of the top designers in Naples, so her reputation is well known.

Renée’s office asked for a roster of cutting edge pianos in various price ranges and finishes which might be appropriate for a premier penthouse overlooking the Gulf. Brands like Schimmel, Bluthner, Sauter and Bechstein were discussed and the models scrutinized. The client’s design space was uber-modern with a lot of black, silver, and metal components. One piano was the perfect art piece for the room, a Fazioli M. Liminal.

This unique special order piano was originally commissioned for a yacht. Inspired by the sea, in profile its shape resembles a wave and the combination black/ silver color of dolphins all atop a steel pedestal, instead of piano legs. The unusual art case of this piano was designed by NYT Line and Philippe Gendre. 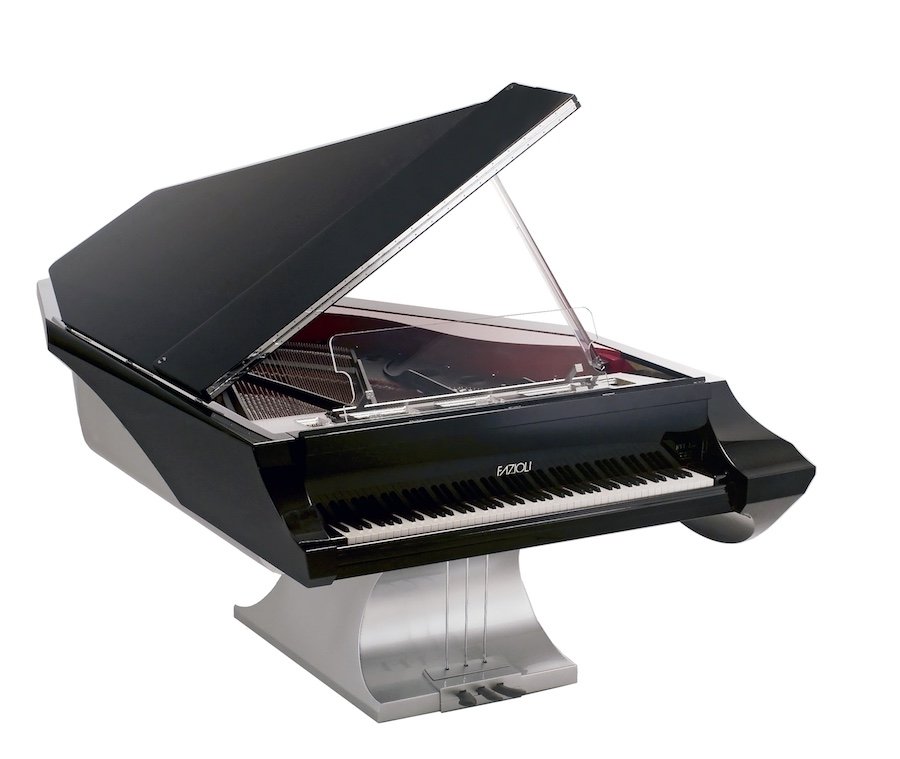 The client, totally in love with the FAZIOLI M. Liminal, requested a surprise modification. He wanted the latest PianoDisc player system installed in the curved metal belly of the piano. The factory said no. This piano would never be able to accommodate a player system. Undeterred, Sunny flew to meet with Mr. Fazioli and his team to personally plead for this modification. There was more resistance. But she prevailed, and the Italians finally agreed to do the factory installation of the player system. Nine months later, the piano personally signed by Paulo Fazioli, was crated, ready to be shipped to the United States.

During the waiting period Sunny prepared for the delivery. She knew the large piano would arrive in special crates and need to be delivered to a penthouse floor, high above the Gulf. Her first step was to measure the freight elevator. Sunny actually built a Styrofoam model of the piano. Current regulations meant the piano could not travel on top of the elevator (a common practice years ago), nor was it any longer permitted to lift the ceiling tiles in the elevator to accommodate oversize items. Use of the stairwell, which would involve blocking it for several hours was also not permitted. The possibilities narrowed down to either a crane or a helicopter delivery. Something the Board had never faced before. They asked the move to be deferred to the summer – end of season. Less invasive for the residents that way. After months of intense communication, proposals, counterproposals and several site meetings with engineers/consultants, building management—the Board and piano moving experts decided against a delivery by helicopter and in favor of delivery via crane.

The piano flew from Sacile, Italy to Miami in February. The massive crates went into secure, temperature-controlled storage at William C. Huff’s Moving & Storage. William C. Huff specializes in the storage and moving of rare art and artifacts. So they were the perfect place for the M. Liminal.

Sunny then began to organize her team for the June delivery. James Bender, a Certified PianoDisc technician and tuner, Curtis Hood, of Just Call Curtis specialty movers, Raniero Tazzi, a Fazioli expert, Milana Strezeva a concert pianist and the William C. Huff movers as well as the crane operators. The building’s engineer, management and board were in attendance as well as Euro Pianos staff, professional photographers (Ivan Seligman and Raniero Tazzi), and most importantly the client and his entourage of friends.

At 8 a.m. sharp the team assembled under the palms in the parking lot in 90 degree Florida summer heat. 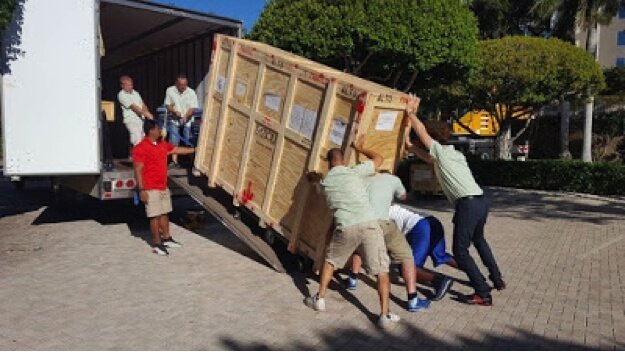 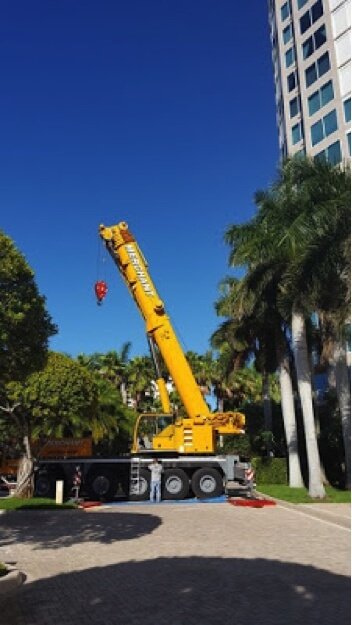 The crane boom began to be assembled briefly blocking the entrance to the parking garage. Sheets of plywood were hoisted up to the terrace of the penthouse to protect the tiled flooring of the “landing spot.” 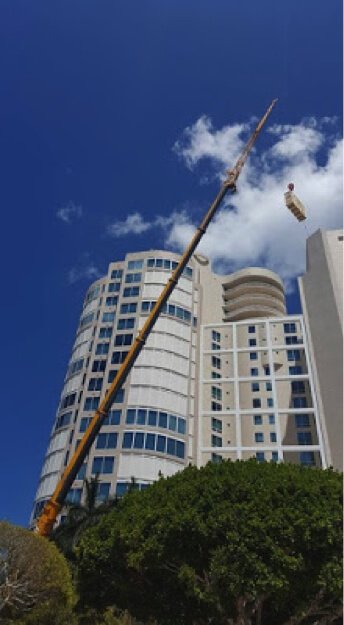 In the meanwhile, the smaller crate which contained the pedestal of the piano travelled to the penthouse via the elevator. The large piano crate however (1,785 lbs.) had to be checked and rechecked for load balance, securely strapped and hooked into place. Much heated discussion ensued about the ability of this crate to clear the railing of the terrace. When all parties were satisfied and all questions had been asked and answered, the crate began a steady slow ascent to the 21st floor terrace. You can be sure more than one person was holding their breath.

The crate cleared the railing and was set down on the terrace. 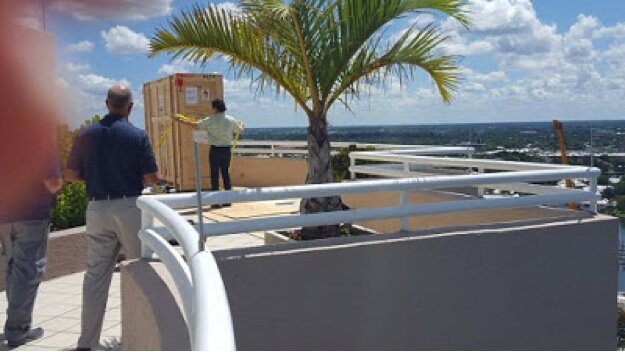 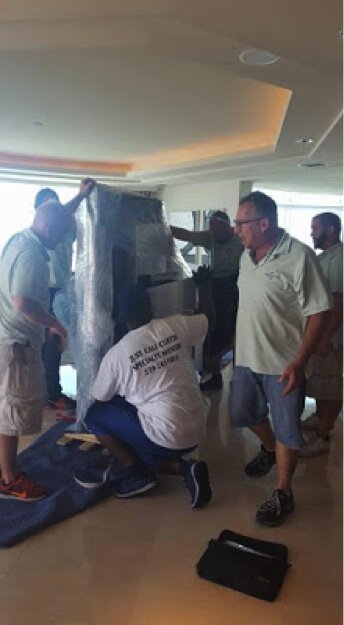 Success in safely completing step one. Now the fun would begin. The factory had provided a video and detailed instructions on how to uncrate this special instrument. First off the team quickly moved the crate closer to the lanai doors .With a 50% chance of thunderstorms, the team pushed (literally and figuratively) to get the piano into the living room as quickly as possible. Sunny had purchased an oversize tarp just in case. A section of the lanai was removed by the building’s contractor. This piano would not fit through a regular sized doorway. Everyone heaved a great sigh of relief when the piano was safely inside. Success in completing step two.

Step three was setting up the piano. Keep in mind, no one present had worked on a piano like this before. Under the watchful eye of Raniero Tazzi, (who had been in close contact with the factory) the movers, adhering to the factory’s instructions, affixed the gleaming pedestal to the piano while it was still on its side. At 1 pm, the piano was safely tilted upright. 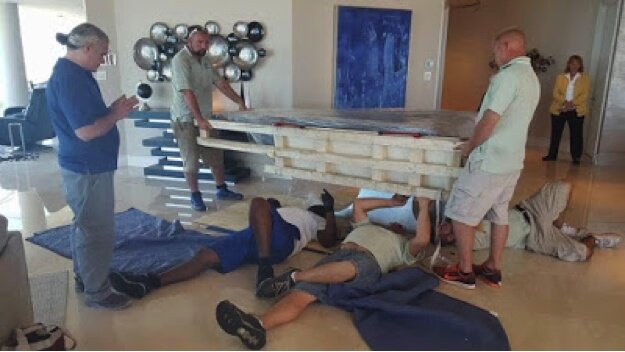 Then it was time to unwrap it. The custom black velvet cover emblazoned with the Fazioli logo appeared first. Finally the fantastic piano was revealed. 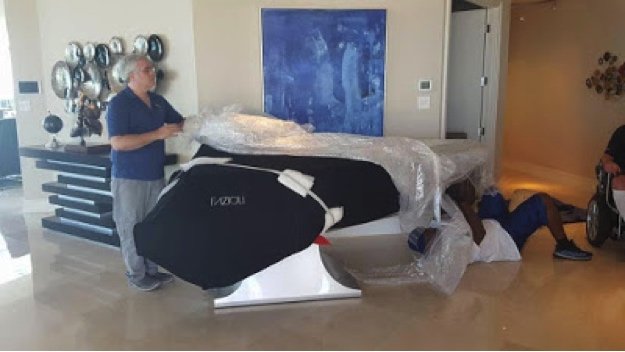 While this was going on upstairs, the crane operators were disassembling the crane boom in the parking lot downstairs. The wooden crate was cut into pieces on the terrace and removed for disposal. (Particular pieces of the crate were saved by the purchaser to be used later in an art installation, notably the little “Sniffer Dog” door section of the crate, used by Customs.) 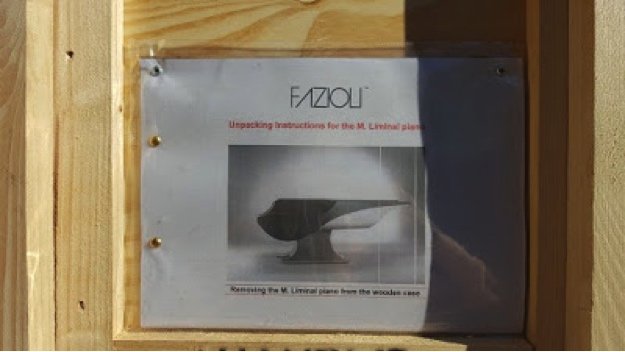 The clear Lucite music rack was installed and the piano’s unique features were explained to the client. For example the brake that locks the casters is hidden inside the pedestal. Concert pianist Milana Stezeva tested the piano. Everything worked perfectly. Now it was time to set up the PianoDisc Player System and the iPad with all the songs. Jim Bender, Euro Pianos Naples player technician worked his magic. The client is not a piano player. This iPad allows him to create playlists and have the piano perform for him and his guests. His first choice – The Eagles’ Take it to the Limit. Sunny and the team couldn’t agree more!! 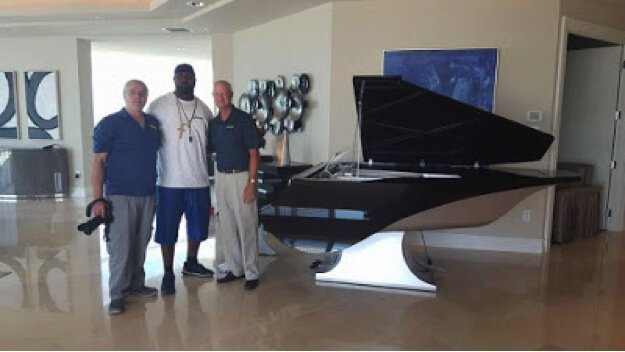 This remarkable Fazioli piano was crated in November, had travelled from Italy to Florida by plane and truck at the beginning of the year, and was then stored for five months on its side. It endured a morning in the parking lot baking in the sun, and baked awhile longer on the terrace. Yet not a note was out of tune. A piano of the highest quality.

By 5 o’clock it was time to leave. There are only nine of these bespoke pianos in the world, a half-million dollar price tag, and an unsurpassed performance instrument. The client was ecstatic with his choice. 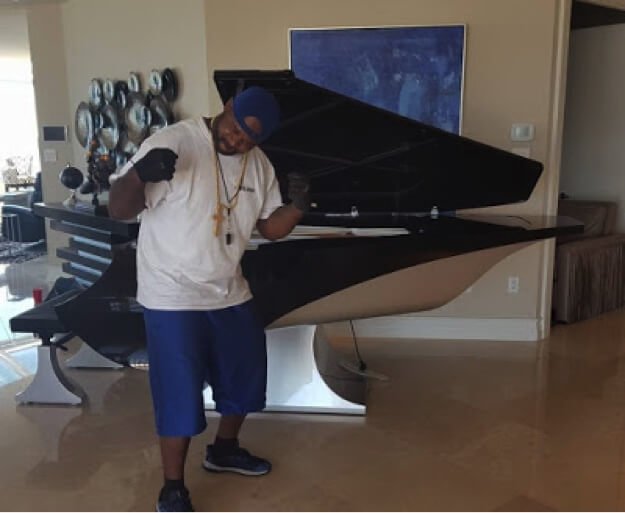 Curtis Hood, our expert piano mover, expressed the joy and excitement we all felt. Sunny Reuter did the almost-impossible, getting this piano into that building. Florida interior designers and their clients can be assured they are in expert hands with Euro Pianos, a company that does what it takes to get the job done.