Steinway grand pianos, and the Steinway B (the favorite of many technicians) cannot be ignored when discussing the best piano brands, although the nomadic history of this company, its myriad owners and configurations of business plans, and the uneven quality of existing product put it at the low end of our list of high-end instruments, due to the “noise” and “uncertainty” that its history imparts today. In addition, there is the issue of the New York City Steinway versus the Hamburg Steinway.

Steinway owns a branch factory in Hamburg, Germany, established in 1880. It serves the world market outside of the Americas. The detailing of the pianos at this Hamburg factory is reputed to be better than the one in New York. Both branches have their advocates among the experts, but Hamburg seems to be more favored in considered opinions. It’s possible to special-order a Hamburg Steinway through an American Steinway dealer; or an enterprising American customer could travel to Europe, buy one there, and have it shipped back home.

Heinrich Engelhardt Steinweg, a German cabinetmaker and piano maker, emigrated to the United States in 1850, and established Steinway & Sons in 1853 in New York City. They were granted patents in their ideas for a better piano with a stronger frame, a richer sound, and a more sensitive action. This ultimately revolutionized the piano as it was known then, and gave them the reputation they enjoy to this day. By the 1880s, the Steinway piano was pretty much the same piano we have today, and the standards set by the founder were strictly adhered to in the next generation.

Without heirs willing or able to take over the business, the fourth generation of Steinways also didn’t have enough capital to finance much-needed equipment modernization. In 1972, they sold their company to CBS who in 1985 sold it to an investment group. In 1995 the company was sold yet again, this time to Conn-Selmer, Inc., a major manufacturer of brass and woodwind instruments, and the combined company (called Steinway Musical Instruments, Inc.) was taken public on the New York Stock Exchange.

In 2013, Paulson & Company, a private-equity firm purchased the public company and took it private once again. Paulson says he is committed to the quality-first approach on which Steinway built its reputation.

Steinway makes two types of vertical piano in three sizes: a 45″ model 4510 studio, a 46½” model 1098 studio, and a 52″ model K-52 upright. In all three models, the middle pedal operates a sostenuto mechanism. All Steinway verticals use a solid spruce soundboard, have no particleboard, and in many other ways are similar in design, materials, and quality of workmanship to Steinway grands. While technicians have always liked the performance of Steinway verticals, they have complained that the studio models in particular were among the most difficult and would unexpectedly jump out of tune. Steinway made small changes to alleviate this problem so the pianos are now mechanically more stable, but an excess of false beats (tonal irregularities) still make the pianos at times difficult to tune. 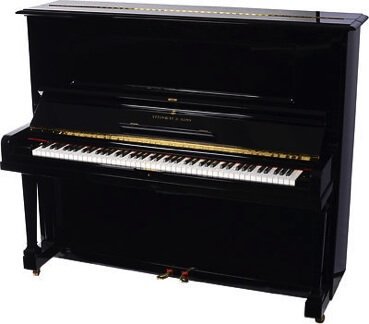 Steinway makes six sizes of grand piano, two of which are new within the last several years. All ebony, mahogany, and walnut grand models come with an adjustable artist bench, the others with a regular bench.

The 5′ 1″ model S is very good for a small grand, but has the usual limitations of any small piano and so is recommended only where space considerations are paramount. The 5′ 7″ model M is a full six inches longer, but costs little more than the S. Historically one of Steinway’s more popular models, it is found in living rooms across the country. Its medium size makes the tone in certain areas slightly less than perfect, but it’s an excellent home instrument.

The 5′ 10½” model L has been replaced with the model O of the same size. Model O was first produced in 1902, but discontinued in 1924 in favor of the model L. Changes over time in both engineering and musical taste, as well as a desire to better synchronize the offerings of the New York factory with Hamburg (where the model O was never abandoned), seemed to dictate a return to the O. The main difference between the two models is in the shape of the tail — the L has a squared-off tail, the O a round tail — but this can also affect the soundboard and bridges and therefore the tone.

Reintroduction of the model O followed the reintroduction of the legendary 6′ 2″ model A. First offered in 1878 and discontinued in New York in 1945, the model A first featured the radial rim bracing and one-piece bent rim construction now used in all Steinway grands. Over the years the model A has gone through several makeovers. The version being reintroduced was made in New York from 1896 to 1914 and is the same size as the model A that has been made at the Hamburg factory for more than a century. Models O and A are suitable for larger living rooms, and for many school and teaching situations.

The 6′ 10½” Steinway model B is the favorite of many piano technicians. It is the best choice for the serious pianist, recording or teaching studio, or small recital hall. The 8′ 11¾” model D, the concert grand, is the flagship of the Steinway line and the piano of choice for the overwhelming majority of concert pianists. It’s too large for most places other than the concert stage.

Steinway uses excellent materials and construction techniques in the manufacture of its grands. The rims are made from layers of maple, and the beams are of solid spruce. The keybed is of spruce, and the keys are of Bavarian spruce. The pinblock consists of seven laminations of maple with successive grain orientations of 45 and 90 degrees. The soundboard is of solid Sitka spruce, the bridges are vertically laminated of maple with a solid maple cap, and all models have duplex scaling. 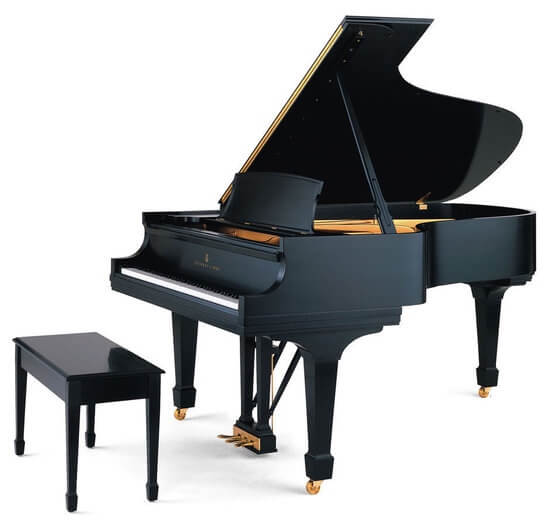 It is well known that Steinway’s principal competition comes from used and rebuilt Steinways, many of which come in exotic veneers or have elaborately carved or customized “art cases.” The company has responded by expanding its product line to include modern-day versions of these collector’s items. The Crown Jewel Collection consists of the regular models in natural (non-ebonized) wood veneers, many of them exotic. They are finished in a semi-gloss and, all regular Steinway grands are also now available in polyester high-polish ebony, lacquer high-polish ebony, and polyester high-polish white.

During the early 1900s, ownership of art-case Steinways became a symbol of wealth and culture. Steinway has resumed this tradition by regularly commissioning noted furniture designers to create new art-case designs, usually around a theme. Each year sees new art-case pianos from Steinway. 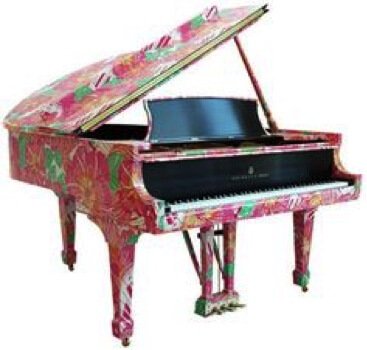 The underlying excellence of the Steinway musical designs and the integrity of the construction process are the hallmarks of the Steinway piano. Steinway pianos at their best have the quintessential American piano sound: a powerful bass, a resonant midrange, and a singing treble with plenty of tonal color. The construction process creates a very durable and rigid framework that also contributes to the power of its sound.

Musical and cabinet detailing, such as factory voicing and regulation, and plate and cabinet cosmetics, are reasonable, but have traditionally lagged somewhat behind the company’s European competitors in finesse. Over the last couple of years, however, the company has been making a determined effort to remedy this and by applying lessons learned from its European operations. Examples include: rounding the edges and corners of satin ebony models so they will better hold the finish and not prematurely wear through; more careful woodworking on the bottom of the piano, and applying clear lacquer to the bottom instead of painting over to hide imperfections; protecting the case and plate during stringing and other manufacturing operations so they don’t have to be touched up, often imperfectly, later on; additional time spent playing-in pianos during manufacture in order to naturally harden the hammers so they don’t need quite so much chemical hardening and voicing in the field; and other numerous details that needed fixing.

Steinway pianos require more preparation by the dealer than most pianos in their class, but as the factory preparation has improved, the work required by the dealer is less excessive. Still, some dealers are more conscientious than others, and one occasionally hears of piano buyers who “can’t find a good Steinway.” How much of this is due to inherent weaknesses in some pianos, how much to lack of dealer preparation, and how much to customer bias is impossible to tell. Perhaps all are in play.

Piano technicians who work on high-end pianos do sometimes remark that some Steinways seem to have more potential than others. Many dealers do just enough regulating and voicing to make the instruments acceptable to the average customer, but reserve the highest level of work for those situations of a high-end user who knows the differences.

Most customers for a Steinway will probably find one they like on the sales floor. However, if you are a discriminating buyer who has had trouble finding a Steinway that suits your preferences, I recommend letting the salesperson know, as precisely as you can, what you’re looking for. Give the salesperson some time to have a few instruments prepared for you before making a decision. It may also help to tactfully let the salesperson know that you are aware that other options are available to you in the market for high-end pianos.

In 2008 Steinway underwent a change in management, the first in 23 years. For the first time, the company’s top executives were recruited from its European operations rather than from America. It is speculated that this may have signaled a subtle change of direction with regard to quality issues, and may be one of the reasons that European quality standards are appearing to be more strictly applied to the American-made instruments.

FAZIOLI vs STEINWAY – Which one is the best?