Pianos are amazing instruments with many interesting working parts.  The instrument is truly a collaboration of genius ideas made into miracles of sound and beauty.  The pedals on a piano have history, just like the piano itself.

WHAT ARE PIANO PEDALS FOR?

The purpose of piano pedals is, of course, to modify various sounds. Foot operated, they each have their own job. The typical modern piano has three pedals – and some have four.  The location of modifying enhancements on the piano was another aspect of development that evolved.  Eventually, during the nineteenth century, foot pedals were attached to a frame located centrally underneath the piano to strengthen and stabilize the mechanisms. This framework often took the symbolic and decorative shape and name of a “lyre,” and it still carries the name “pedal lyre” today for a modern pedal assembly. 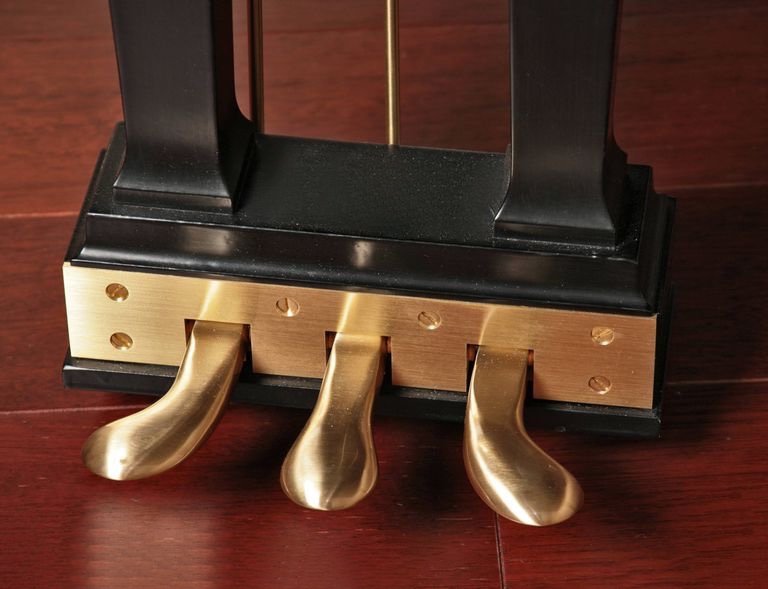 WHAT ARE THE PEDALS CALLED?

LEFT HAND PEDAL – The pedal to the left is the “soft pedal” (or una corda).  The una corda was invented in 1722 by Bartolomeo Cristofori, who also made the first pianoforte, and was originally operated by a hand stop, not foot pedal.  Some even refer to it as the “shift pedal” because when this pedal is depressed on a grand piano,  it physically moves the action mechanism to the right. The soft pedal modifies timbre not just the volume of the tone. Soon after its invention, the soft pedal became a standard fixture on most pianos.

The left pedal on a modern upright is not truly a soft pedal because it does not shift the action sideways. This cannot happen because of how the upright piano action is secured. A more accurate term for the left pedal on an upright piano is the “half-blow” pedal. When the pedal is activated, the hammers move closer to the strings so that there is less distance for the hammer to swing.

RIGHT HAND PEDAL – the “sustain pedal” or sometimes called the “damper pedal” is on the right and is the pedal most used. The damper pedal lifts all dampers off the strings so that they keep vibrating and resonating after a keyboard key is released. In effect, the sustain pedal makes every string on the piano a sympathetic string, creating a rich soulfulness in tone. The sustain pedal has the secondary function for legato effect. When hearing music, a listener generally expects a seamless sound as opposed to one that is disconnected or disjointed. It has become our ideal of what is most beautiful and expressive.  Pianists learn to delay the lifting of their finger until the next note is in place so that a key is pressed down at all times. This involves coordination from the wrist and proper finger strength. They also employ the pedal to keep the sound sustained. All of these techniques take many years of practice for musicians to perfect.

MIDDLE PIANO PEDAL –  the “sostenuto pedal” was inspired by the French piano builders to sustain notes leaving other notes unaffected. It sustains differently than the sustain/damper pedal by holding up only those dampers that were already raised at the moment that it was depressed whereas the sustain pedal holds up all dampers.  French piano builders Alexandre François Debain and Claude Montal built sostenuto mechanisms in 1860 and 1862, but did not catch on right away with other piano builders. In 1874, Albert Steinway perfected and patented the sostenuto pedal. He began to advertise it publicly, and soon the Steinway company included it on all of their grands and high end uprights. Other American builders followed suit, with European builders being slower to pick it up as a standard.

Uses for the sostenuto pedal include playing transcriptions of organ music (where the selective sustaining of notes can substitute for the organ’s held notes in its pedals), or in  contemporary classical and spectral music. Usually, the sostenuto pedal is played with the right foot.

Some grand pianos and most uprights can lack a middle pedal. Or may have a middle pedal that is not a true sostenuto, for there are many other functions a middle pedal can have. In an upright, the middle pedal could be another “half blow” (like the left soft pedal) but will slide into a groove and stay engaged.  Sometimes a middle pedal only operates bass dampers, or might lower a felt muffler to soften sound.   True sostenuto is rare on uprights, except for more expensive models such as those from Steinway and Bechstein. They are more common on digital pianos as the effect can be easily mimicked in software.

SOME FOURTH PEDALS –  Just as some piano makers have created models with more than 88 piano keys, there are builders who have added a pedal.   In 1850 Muzio Clementi created a pedal called a “harmonic swell” which gave a reverberation for a full, rich sound. The effect used the sympathetic vibration set up in the untuned non-speaking length of the strings, requiring a larger soundboard than usual to accomodate a second bridge.

About the same time, The Dolce Campana pedal pianoforte built by Boardman and Gray, New York, demonstrated yet another creative way of modifying the piano’s sound. A pedal controlled a series of hammers or weights attached to the soundboard that would fall onto an equal number of screws, and created the sound of bells or the harp.

Although the piano and its pedal configuration has been in its current form since the late 19th century, there is always the chance that new pedal configurations will be designed. In 1987, the Fazioli piano company in Sacile, Italy, built the longest piano ever made until this time. (10 feet 2 inches). This piano has four pedals: damper, sostenuto, una corda, and half-blow. The contemporary Fazioli concert grand piano model F308’s fourth pedal is to the left of the traditional 3 pedals. 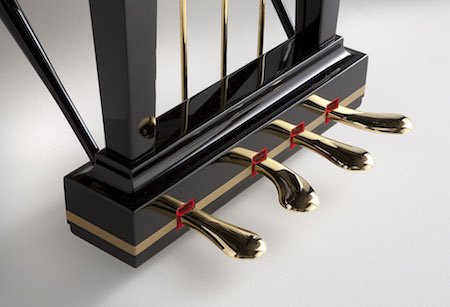 This pedal acts similarly to the “half-blow” pedal on an upright piano, in that it collectively moves the hammers somewhat closer to the strings to reduce the volume without changing the tone quality, as the una-corda does. The F308 is the first modern concert grand to offer such a feature.