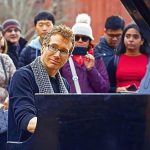 One of the iconic city parks in New York City, Washington Square, sits in lower Manhattan, and boasts a large fountain and a marble arch (built to commemorate the inauguration of George Washington) in the middle of Greenwich Village. Surrounded by buildings owned by NYU, it has a long history as a gathering place for political rallies, “flower children,” chess players, tourists, dog walkers, cyclists, and street musicians of every stripe:  steel bands, hip hoppers, jazz trios, soloists with violins and guitars, as well as vocalists.

A classical pianist named Colin Huggins has become one of the most famous buskers of Washington Square. Born in 1978, hailing from Georgia, self-trained in guitar and piano, he was uncertain what to do with his life. He hit New York City in 2003. For four years he played for the Joffrey Ballet as an accompanist for ballet dancers, but found himself wanting to be more creative. Drawn to street performers, he learned to break dance, but decided his piano talents might be more viable.

He and his roommate decided a real piano played in the street would be a spectacle to draw attention and allow him to be his own boss.

Dubbing himself “The Crazy Piano Man,” in 2007, he pushed his upright piano outside and rolled it on a dolly to Father Demo Square in Union Square where he successfully began a new career ($30 the first day) as a busker. That is until neighbors complained about the crowds and he was forced to move on. 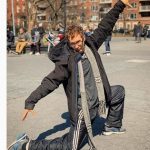 Playing in the New York City subway, he earned a guest performance on the television series Louie, and he began playing in Washington Square two or three times a week. Becoming a career busker, Huggins bought more pianos off Craigslist and stored them around the city close to his favored spots.

He found himself loving the work and often plays up to twelve hours a day, surrounded by listeners. 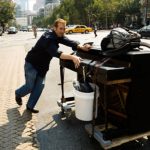 The rest of the week he practices and participates in related activities.  The long hours outdoors are tiring, hard on his hands which actually bleed when he plays in the winter.

Loving classical music, he takes the time to learn pieces by heart to add to his repertoire, including “Un Sospiro” by Liszt which had evaded him in his early training. He also mastered Rachmaninoff’s “Etude in E-flat minor,” among many others. He plays entirely from memory, so this is no small feat. He is as comfortable with classics as the Beatles and other contemporary piano music.

There was a setback when the NYC Dept. of Parks and Recreation began ticketing musicians near monuments and park benches. In 2011, he was fined over $6,000, but that policy was later revoked. In the same year he began a Facebook crowdfunding campaign to raise almost $9,000 to purchase a baby grand piano to replace the uprights.

His Yamaha baby grand was stored at a Spring Street mini-storage facility less than a mile from the park. Weighing hundred of pounds, the instrument was rigged to roll down the city streets without its legs which were attached on site. Huggins mastered the feat with glee.

He hires piano tuners to come to the storage units and maintain his numerous instruments. The tuners acknowledge that the pianos which are regularly rolled over curbs and exposed to the elements take a beating.

He plays in the park all year around, during all seasons, keeping a careful eye on weather reports. Weather dictates his work days. He said he feels guilty about the humidity and sun exposure on a baby grand, but the whole of his audience agree that the larger instrument is incomparably better sounding than the uprights. Huggins agrees that nothing beats an acoustic piano, and that, added to the freedom of playing outdoors to an appreciative audience, is ideal. 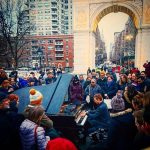 Over the years Huggins fan base has exploded. Social media has made a celebrity of him and appreciation for his music, his helpful, easygoing demeanor, and talents can be found on Facebook, Instagram, Twitter as well as many television and print articles about him. He has gone through many pianos, many fundraisers, and a Steinway currently makes a statement. It carries a message, an indication of Huggins personal philosophy which he explains.

Huggins says, “the phrase comes from Woody Guthrie, and is first and foremost a statement of nonviolence.

Woodie Guthrie saw this phrase posted in a weapons factory in America during World War II. He then proceeded to put the phrase on his guitar.

The fundamental meaning, as far as I can tell, is that we remove divisive ideology from humanity best with music and knowledge and thoughtful discussions, and we should only concern ourselves with wellbeing.” 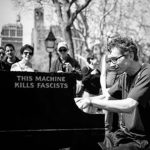 In Washington Park, he is a permanent fixture around which events and happenings swirl.

In 2017, one man requested Clair du Lune and asked if he could lay under Huggins’s piano while it was played. The man wept while doing so, and Huggins decided it was something he could offer anyone. It’s become a thing now for people to lay under the baby grand to experience the music in this special way. 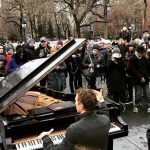 “When you get closer to a piano, you can actually feel the vibrations,” Huggins says. “So you’re not only hearing the sound, but you can feel it too. It makes it more of an intimate and powerful experience.”

He estimates that six out of 10 listeners who try it end up weeping. Even Alec Baldwin couldn’t resist it and a tear or two. 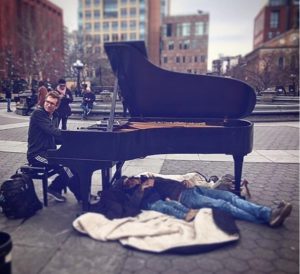 During the summers, “Opera Nights” are held with Huggins accompanying singers. Listeners flock to celebrate the occasions. Free opera in the middle of iconic Washington Square in the Big Apple on a balmy summer night—it’s hard to beat that for a happening. 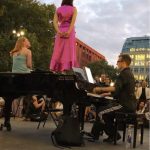 There’s a Vimeo of interpretive dancer, Emily Smith, in a collaborative performance with Huggins, made in 2018. Her naked upper body is an artistic statement, covered with words supporting her position. Another happening in Washington Square. 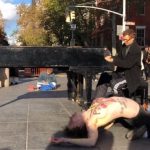 There are digital albums of Huggins work online, as well as many ongoing interviews and videos of him over the years.

From our viewpoint, it looks like not all the keepers of the flame of music reside in concert halls and the lofty halls of classical music institutions.

This veritable self-taught young man has a mission in life to give music to as many people as he can reach from the piano bench he’s chosen, and he seems to be doing a very authentic and interesting job of it. Maybe not so crazy at all.