What’s Behind a Brand?

Everyone who has ever heard of Euro Pianos Naples knows that it is one of the oldest, most reliable piano sellers in the industry.  Since its beginnings from a 1965 storefront to its evolution today of a luxury online piano boutique, this family-owned business has had an esteemed reputation for representing the finest European made instruments, handcrafted by artisans.

Perhaps more important than the beautiful designer pianos they sell, their attention to clients, consultations and follow-up service is heralded and unmatched.  That expertise in all facets of everything piano is unique in the industry.  But as Forbes Magazine once said, “People don’t care how much you know until they know how much you care.”  And that, I think, is the untold story of Euro Pianos Naples.

And behind every business with a reputation for excellence, you will find an individual who set that standard and represents that excellence in their own personal life.  Behind Euro Pianos Naples stands a woman, Sunny Reuter, the daughter of the founder, who has her own story to tell.

Sunny Manchen Reuter was born in Germany and grew up in Canada where her father had his first piano store.  Sunny’s childhood was spent at the feet of piano tuners and concert musicians.

The Manchens  expanded and opened a piano store in Naples, Florida and at one time displayed as many as a hundred and thirty pianos at a time on the showroom floor. Heavily involved in community, formal concerts were held at the store, featuring local and visiting performers. 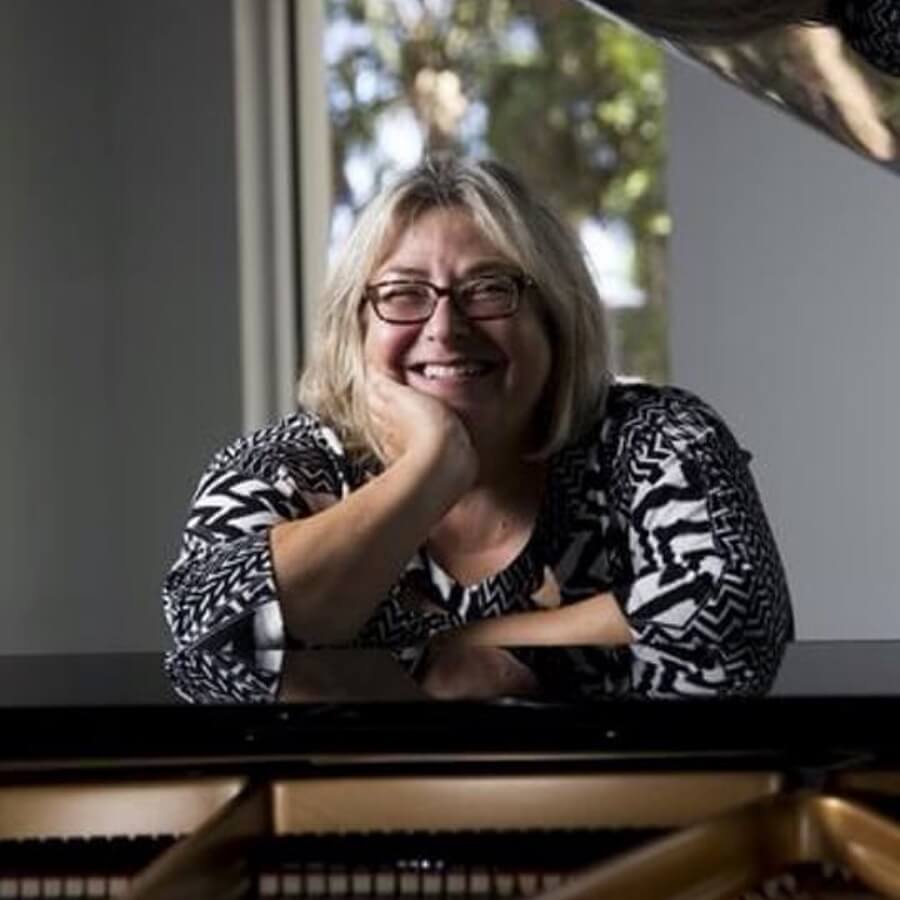 By the time Sunny took over the company, the piano industry was vastly different, the age of healthy brick and mortar piano stores was drawing to a close for most retailers all over the nation, and she made the executive decision to downsize to a small piano salon, where ultra high end Fazioli and Bosendorfer grands could be seen, and where community concerts could continue to be held.  And this is the first clue to the secret that is Euro Piano Naples.

When Sunny decided to close the salon, and create her business model online, she was reluctant for one reason only. The community that had so enjoyed the Euro concerts would be left without that venue.  The former employees who managed the concerts jumped in to save the events, move them to local churches and halls; and the Grand Piano Series was born.  Sunny provided funding and a Fazioli to kick off the new venture, and the community retained the wonderful piano recitals they had grown to love. The Grand Piano Series with Milana Strezeva as Artistic Director continues independently with a successful attendance to this day.

Sunny’s own attendance at events all over Naples, and her gracious gifts of the free use of a Fazioli grand piano to churches and other public performance functions are widely known and appreciated.  She has become a notable in Naples music circles. Sunny serves on the board of Bayshore Cultural and Performing Arts (CAPA) as well as on the Grand Piano Series. CAPA is a nonprofit organization having a goal of building a collaborative Performing Arts Center in Naples to augment and support what is already there and to provide the community accessible and affordable cultural, educational and performance opportunities.  This is right up Sunny’s alley, as the new center will provide programs for local youngsters including at risk youth to perform, as well as a myriad of cultural groups such as the ballet, choral groups, visual arts, orchestras, bands and theatre.

This is who Sunny is.  A people person who cannot help herself from wanting to help others.

When a customer came to Euro and said that she wanted a crystal piano but couldn’t afford the six figure price of the Lucid grand built by Bluthner, Sunny responded.  She set out to create an affordable alternative for her client. The design was a success and a new venture was born. The Aire™ baby grand is designed and built in Miami.  When one has grown up with nothing but European luxury instruments, an affordable piano in Sunny’s estimation had to embrace the same high standards and detailed care given to the expensive ones.  She oversees the minute details of the construction of Euro’s own models, right down to the hardware and casters.  The Aire™ quickly became the best-selling baby grand that Euro Pianos ever had.  Other customers began to make requests of their own, and two more unique pianos are now being produced to meet those needs. Sunny Reuter not only knows pianos, but she cares deeply about people and their needs. Not just customers, not just musicians, but humankind in its entirety. Her sunny outlook and positive vibe make her well loved and popular.  Her love of people is absolutely what makes her unique, but that is coupled with a work ethic of quality products and uncompromised service.  She is the secret ingredient behind the brand.