Today’s pianos (both digital and acoustic) as well as portable keyboards can be found in many key configurations. The more keys, the greater the instrument’s range. It is significant that they are called “keys” because in music theory, the key of a piece is the group of pitches, or scale that form the basis of a music composition, and might be “Major key” or “Minor key” as well.  Piano keys are the “map” for knowing what notes will sound when the key is struck.

Lower-end synthesizers may have as few as 25 keys, although most home-use keyboards come with 49, 61, or 76 keys.

Black piano keys sit higher than and to the rear of the white keys.  Boards are laid out in configurations of seven white keys and five black keys (a total of 12 keys) which repeat across the keyboard.  Note that the black keys form a two-key, three-key pattern which provides the identification of the white keys below.

Musical notes are assigned to the white keys based on the pattern of the black keys above them.  There are seven notes (ABCDEFG) and would look like this. 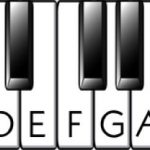 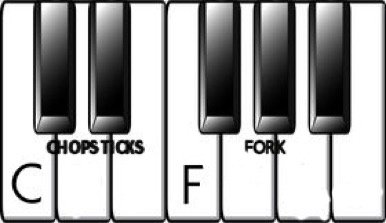 To the left of the chopsticks (two black keys) is the note C.

To the left of the fork (three black keys) is the note F. ( We love these little memory tricks presented in Piano Keys for Dummies.)

Just to get oriented, let’s use a 29-key keyboard (below) using middle C as our starting point. We’ll find the first white key to the left of the middle chopsticks. That’s middle C:

First strike middle C, then play the next seven white keys in succession, going (to the right) up the keyboard.

C, D, E, F, G, A, B and the next key you played would be a C, one octave higher. This is where the pattern of keys repeats itself. You just played a C major scale, in fact. Here are the note names for the C major scale: Moving up from C, you have the notes D, E, F, G. When you get to G, think “Go” as in “go back to the beginning of the alphabet, A and B.”

The most important musical scales are typically written using eight notes, and the interval between the first and last notes is an octave. For example, the C major scale is typically written C D E F G A B C, the initial and final Cs being an octave apart. Two notes separated by an octave have the same letter name and are of the same pitch class. 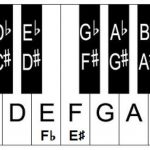 The black keys are used to identify sharps(#’s) or flats(b’s). When a note is said to be “sharp” or “flat” means to play the next higher key and flat the next lower.

Sharp is used for a black key to the right of (or higher than) a white key.

Flat is used for a black key to the left of (or lower than) a white key.

And here’s a schematic for an 88-key piano board. Note the two white/one black key at the start (A,B) , starting with A which equals 3 keys added to the 7 multiples of 12, and one extra C at the end makes 88 keys.

A Brief History of Piano Keys

Historically  keys can be traced back to little levers used on water organs before the collapse of Rome. Organs continued with variations of levers, some so heavy their players were called “organ beaters.” But organ keys found dating back to 226 A.D. were no heavier than modern keys. The lack of a lightness of touch was an issue in many instruments right up to the 1700’s with Bach himself complaining of Gottfried Silbermann’s iconic pianos. 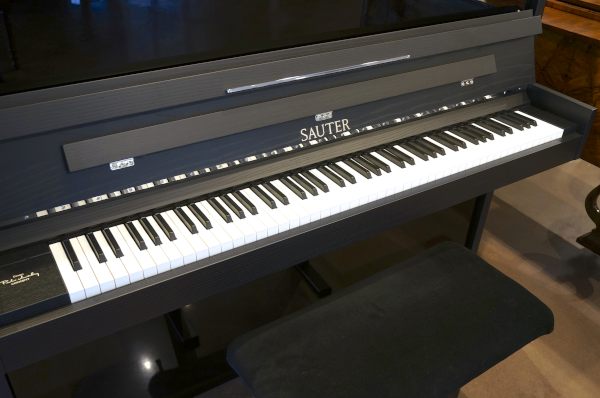 F sharp is likely the first sharp to be added to the keyboard.  A painting by Van Eyck confirms that around 1430 narrower keys were being made than in earlier years, with the use of sharps. Since the mid-thirteenth century, the keyboard hasn’t changed except for small differences in the key-width and key coverings. 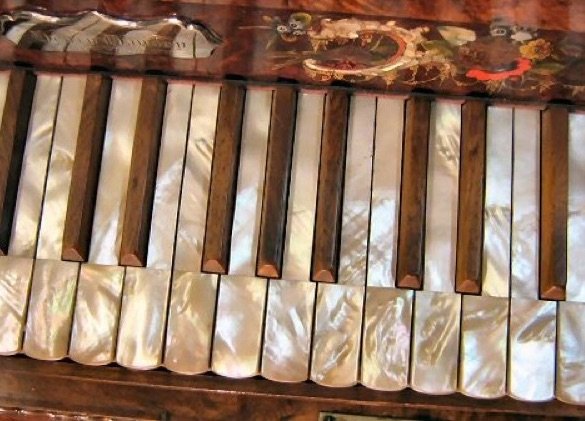 The white keys (called naturals) were once darker with the sharps white, a custom said to have started in France to better show off the player’s hands. Many and varied materials were  used to cover keys including bone, mother-of-pearl, porcelain, tortoise-shell, silver, boxwood, cedar, ebony, pear and other rare and polished woods. 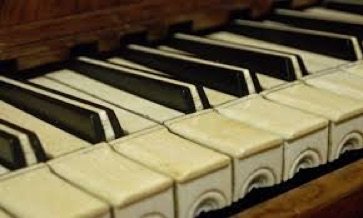 At times the fronts of the naturals were beautifully carved.

In the latter 1700’s Viennese keys were most often ivory.  Silbermann’s keys were very thick ivory.  In efforts to make cheap lines of pianos, ivory was replaced with cellulose in 1862, simulating ivory, and has been used on the cheapest pianos since then.

Starting in 1959, acrylic plastic began to be used on keys, and in the sixties an embargo was put on ivory. Different countries making pianos had different standards but by the 1970’s ivory in the US was off limits for key coverings.

As Bach himself complained about the touch of his keyboards, most pianists today look for a touch that suits them.  Acoustic pianos historically have the lightest and most favorable touch, responsive to the player’s style. Digital pianos, introduced in the 1980’s, offered an electronic solution for traveling performers, for piano budgets, small spaces, and convenience. They didn’t match the acoustic piano in sound or touch, so improvements kept being made to make digital pianos as close to an acoustic as possible. One of the ways this was done was with weighted keys to provide the right resistance to touch, and are more sensitive to speed, pressure and lightness for a range of soft and loud dynamics. 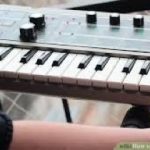 How to Clean Piano Keys

Unless your piano is an antique with ivory keys, a little vinegar, water and a soft cloth are all you need to buff up dirty keys. Try not to use a colored cloth. Be careful not to drip water between the keys; keep the moisture just damp on the cloth. And follow with a dry cloth to buff. 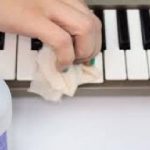 If you don’t know what your keys are, plastic or ivory, the best method is to check the color and surface of the keys. Ivory keys usually have visible lines shaped like semi circles, which are the natural grains of the ivory.  Plastic keys are uniformly white.

With ivory keys, know that they tend to yellow with age and that a typical cleaning will not restore them to white. Ivories should be cleaned with a soft cloth and a very mild solution of dishwashing detergent. It may be possible to whiten them placing them in the sun for a few hours. Before you go this route, be sure to speak with a piano technician who has experience with ivories. The main thing to remember is that piano keys should be cleaned regularly for health reasons.  Little (and big) fingers are magnets for dirt and germs!