In 1828 in Vienna, Austria, Ignaz Bösendorfer founded his piano company and rose to fame when Franz Liszt endorsed his concert grand. Liszt had destroyed every other piano set before him and was unable to destroy this one no matter how hard he played it.

Ignaz died in 1858 and under his son, Ludwig’s direction, the firm greatly prospered and the pianos became even more famous throughout Europe and the world. Ludwig, having no direct descendants, sold the firm to a friend, Carl Hutterstrasser, in 1909. Carl’s sons, Wolfgang and Alexander, became partners in 1931. Bösendorfer was sold to Kimball International, a U.S. manufacturer of low- and medium-priced pianos, in 1966. In 2002 Kimball, having left the piano business, sold Bösendorfer to Austria’s third largest financial institution. This bank encountered financial troubles of their own and sold the piano company to Yamaha in 2008 who promised to make no changes to Bösendorfer’s location or methods of production, and keep its sales network totally separate from Yamaha’s. Bösendorfer manufactures fewer than 500 pianos a year, with close to half of them sold in the U.S.

Bösendorfer makes a 52″ upright and eight models of grand piano, from 5′ 1″ to the 9′ 6″ Imperial Concert Grand, one of the world’s largest pianos. The 5′ 1″ grand, new in 2012 and unusually small for a Bösendorfer piano, has the same keyboard as the 5′ 8″ grand, ensuring a good touch despite the instrument’s small size. The company also makes the Conservatory Series (CS) which are slightly less expensive versions of four grand models.  They are like the regular grands except that the case receives a satin finish instead of a high polish, and some cabinet details are simpler. Previously, the CS models also had a satin-finished plate, and were loop-strung instead of single-strung, but in 2009, regarding these features, the specifications of the regular models were restored. All Bösendorfer grand pianos have three pedals, the middle pedal being a sostenuto.

One of the most distinctive features of the grands is that a couple of models have more than 88 keys. The 7′ 4″ model has 92 keys and the 9′ 6″ model has 97 keys. The lowest strings vibrate so slowly that it’s actually possible to hear the individual beats of the vibration. Piano technicians say that it is next to impossible to tune these strings by ear, although electronic tuning aids can help accomplish this. Of course, these notes are rarely used, but their presence, and the presence of the extra-long bridge and larger soundboard to accommodate them, add extra power, resonance, and clarity to the lower regular notes of the piano. In order not to interfere with the normal keyboard configuration for spatial orientation while playing, the keys for these extra notes are covered with a black ivorine material. 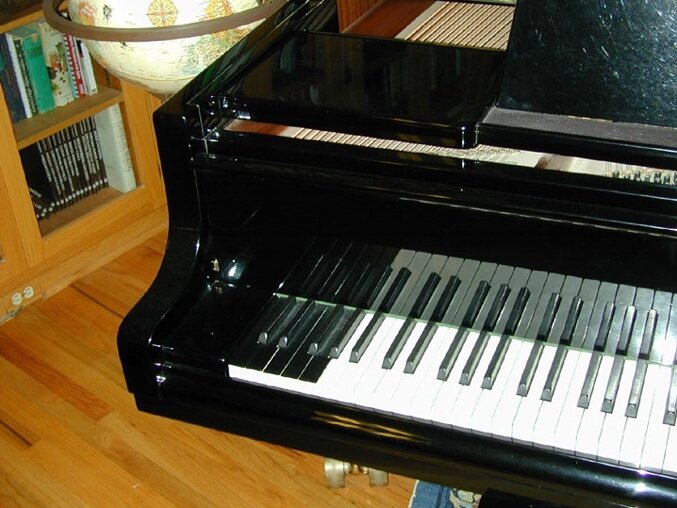 The rim of the Bösendorfer grand is built quite differently from those of all other grands. Instead of veneers bent around a form, the inner rim is made in solid sections of spruce and beech that are joined together. The outer rim has a solid core of quartersawn spruce that is grooved by Bösendorfer craftsmen so that it can be bent around the inner rim; after bending, the grooved sections are filled with spruce inserts. Because spruce is better at transmitting than reflecting sound, the extensive use of it has the effect of making the rim an acoustical extension of the soundboard, causing the entire body of the piano to resonate. This, along with the scale design, may be why Bösendorfers tend to have a more delicate treble, and a bass that features the fundamental tone more than the higher harmonics.

Although the cliché  that “Bösendorfers are better for Mozart than Rachmaninoff” may be an exaggeration (as evidenced by the number of performing artists who successfully use the piano in concert for a wide variety of music), the piano’s mellow sound is certainly ideally suited for the classical repertoire, in addition to whatever else it can do. In recent years Bösendorfer has refined its designs to increase tonal projection. The relatively newer 6′ 1″, 7′, and 9′ 2″ models have been designed specifically to appeal to pianists looking for a more familiar sound. In all models, however, the distinctive Bösendorfer difference is still readily apparent.

In the past few years, Bösendorfer has introduced a number of interesting instruments in new cabinet styles. These include a Porsche-designed modern piano in aluminum and polished ebony (it can be special-ordered in any standard Porsche finish color). These are a couple of models of the Porsche piano. 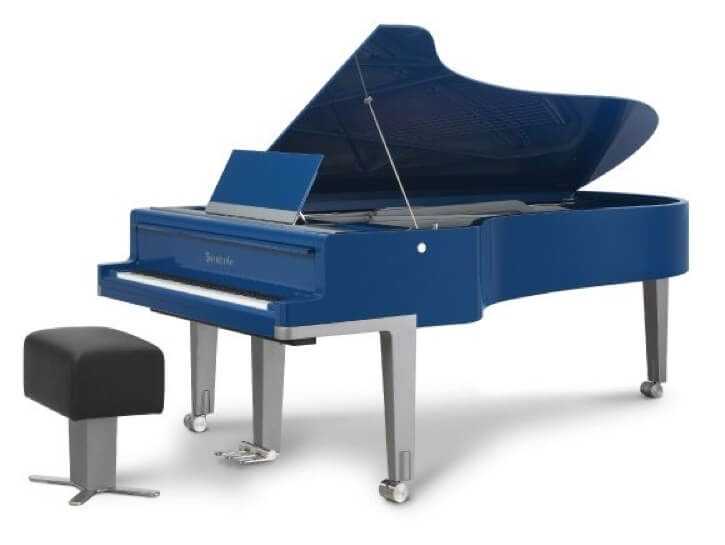 Perhaps not to be outdone by Porsche, in 2009 Bösendorfer produced a model commissioned and designed by Audi on the occasion of that automaker’s 100th anniversary. 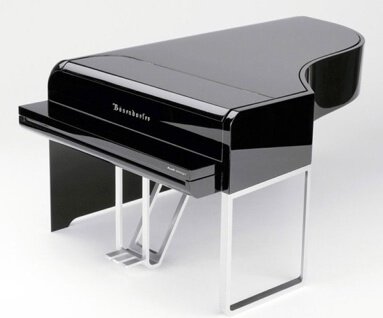 Perhaps the world’s most expensive piano inch for inch, Bösendorfer grands make an eloquent case for their prices. They are distinctive in both appearance and sound, and are considered to be among the best pianos in the world.

Warranty: 10 years, parts and labor, transferable to future owners within the warranty period.