The most popular piano is the world is likely the baby grand. Today’s piano industry offers a multitude of choices in baby grand instruments – traditional, rococo, modern, futuristic designs – as well as colors, veneers, finishes, inlays, LED lights, acrylics, metal and artistic graphics. The perfect piano for every home is available for the asking, and most people ask: where do I start?

Well, let’s start at the beginning. What exactly is a Baby Grand Piano anyway? How does it differ from a Grand Piano? Or a Concert Grand Piano?  How many categories of acoustic pianos are there?  There are no hard and fast definitions, but as a rule of thumb, and with the 300-year-old history of the instrument, these categories will give you an idea.

Pianos are measured by their LENGTH, from the keyboard to the tail end of lid.

Let’s start with the granddaddy of the industry. The concert grand, normally made for and used by professional concert halls and artists, is 8’11” and longer. The longest to date is 10’ 2”.

A slightly smaller version of the concert grand is made to accommodate those smaller venues that might not require as much sound. These instruments can run from 7’4” up to 8’10” and would be good for medium sized churches and halls where the pianist doesn’t have to reach the upper balcony.

An acoustic piano that was popular all through the early 1900’s in America was considered a “parlor grand” and that’s because the largest room in the house was called the parlor. This sized grand is about 6’8” and the name still is used in some stores.

The drawing room is an even older version of a parlor, referring back to 16th century parlance for a room where one could “withdraw” for more privacy. It gradually became shortened to drawing room, another word for living room. But the slightly smaller origins of the withdrawing room dictated the size of this grand at about 6’4” In those days, it would have been harpsichords, frontrunner of the pianoforte. Thus, the large size. History likes to hold onto monikers, and this one has managed to survive through the centuries, although not widely used anymore.

Trained pianists who play in public have needs for music to attain certain resonances, tones and qualities – in order to satisfy and reach their audiences. An acoustic piano is usually considered “professional” when it is at least 6’long. Small pianos today sometimes may actually have these same attributes, as technical improvements have been made over the decades, but six feet is still the accepted rule of thumb for a “professional” instrument.

As society evolved, a middle class with some disposable income emerged. They too wanted pianos. Historically only the rich and royal were able to own them. But as the demand for pianos increased, the builders had to accommodate more modest homes, and thus the sizes began to shrink. Modern America now had “living rooms” instead of parlors or drawing rooms, and 5’10” grands were made to fit the reduced spaces.

As the popularity of pianos exploded, so did the need come for different sizes to fit yet smaller rooms. Maybe a music room or a finished basement could accommodate a piano 5’7” to 5’9” so this was deemed (by some) as a “medium grand.” Not everyone would agree, but these categories give you the ranges. You will find variations to all of these from manufacturer to manufacturer.

Finally, we arrive at our destination, the BABY GRAND! The big little favorite almost universally runs from 5’ to 5’7” and is so popular because it fits in almost any space where it’s needed. Also, the technical aspects of piano making have improved with every size rendition, thus giving the baby grand almost all the credentials, it needs for anything but Carnegie Hall.

There is one more category – under 4’7” up to 5’instruments are called petite, but in these sizes, there is a shortage of soundboard for the kind of resonance found in a baby grand. This would not be a recommended size. There are beautiful upright pianos today that are perfect for spaces that simply cannot house a standard baby grand.

What Are The Actual Dimensions Of A Baby Grand Piano? 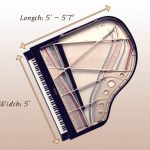 The length of a baby grand piano ranges from five feet to five feet seven inches, as detailed above, (with the petite being under five feet in length).

The width of most acoustic pianos, regardless of their length, is five feet wide.

What Are The Differences Between A Baby Grand And A Grand Piano?

The size of the soundboard and the length of the strings make the most difference in the volume, resonance and sound quality of a piano. It stands to reason that a concert grand whose sound can reach the upper echelons of huge concert halls requires a larger soundboard and longer strings. Such a huge piano in the living room of the normal home however might blow listeners out of the house.

As the sizes decrease, the sound travels a shorter distance. It does not mean that the quality of the tone and resonance is necessarily lessened.

A baby grand piano with a wider tail can house much longer bass strings and has space for a bigger soundboard. Additionally, it has a better receptive area for its bridges. The baby grand pianos with wider tails tend to be superior pianos because the bass tone is richer.

Small well build pianos can function with the integrity and richness of tone of their larger kin. It all depends on the quality of the components and the expertise of the piano builder.

How Much Floor Space Is Needed For A Baby Grand? 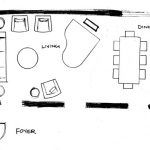 When measuring a room for a piano, you have to consider the piano dimensions. When shopping, check with the manufacturer for the exact specifications, so you know what the actual dimensions are, then add two more feet in length, for the bench or stool.

In addition to the actual size of the instrument, the pianist needs to be able to move comfortably in and out of the setting. How and where the piano is positioned can make a visual presentation in the balance and décor of a room, furniture to space.

The baby grand is a choice model for home use because its volume and tone are sufficient to “fill” the typical living room, and its size makes it appropriate for modest homes as well as high end luxury homes.

Should You Buy The Smallest Baby Grand?

People who have small rooms sometimes think that a petite baby grand under five feet is the way to go, but as mentioned earlier, there is a loss of sound quality associated with really short petite grands.

Larger soundboard and longer strings produce greater volume and resonance of tone. As you can see, a petite baby grand is not even as long as it is wide. It pays to remember that the longer the piano, the better the performance.

It might be worthwhile to take a look at the beautiful new uprights available today if your floor space can’t accommodate more than a petite baby grand. The quality of high-end uprights surpasses that of most petite grands.

What Is The Average Weight Of A Baby Grand?

Weights differ slightly from model to model, from brand to brand, but on an average, a baby grand piano weighs 500 pounds, about 100 pounds less than a standard grand piano. Upright pianos weight about 300 to 350 pounds, as a comparative. Again, when shopping for a piano, check out the specifications of the piano you want to get exact dimensions.

So in summary, baby grand piano size dimensions play an important role.  They determine your sound quality, traffic flow and visual impact in your home.  The choice of a baby grand is a big step and Euro Pianos is here to help.

We can’t resist showing you our own inhouse-designed acrylic baby grand, the Aire, (so transparent it looks like it floats on air)  There’s something about acrylic that makes a piano shrink to a smaller size in space. 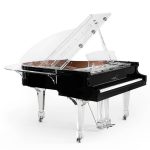 Euro Pianos Naples is a respected distributor of European luxury musical instruments. The company’s origin dates back to 1965. Euro Pianos represents world renowned brands such as Sauter, Bluthner Lucid Pianos, Fazioli and it has recently become a manufacturer of its own acrylic instrument – The Aire. Apart from being a successful retailer, consultant, and entrepreneur organization, Euro Pianos is actively engaged in the artistic and community life of Naples, Florida as an organizer and supporter of musical events throughout the years.